A pirate, a seemingly intoxicated one. 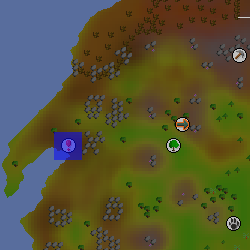 Lieve McCracken is a non-player character located by the entrance of the Kraken Cove. If players attempt to attack the monsters in this area, she will stop them from doing so, claiming the cove is only for those who have a Slayer assignment.

According to her, she's an infamous pirate who is wanted in several kingdoms for murder, armed robbery, and flag desecration. When asked where is her ship and crew, she says that they were destroyed by the cave krakens and waterfiends that she brought to the Cove for a relative of hers.

Players can give her 10 kraken tentacles, costing 4,154,750, in order to enhance a trident of the seas or swamp to hold 20,000 charges, rather than 2,500. 10 tentacles are required for every trident the player wishes to enhance.

Retrieved from "https://oldschoolrunescape.fandom.com/wiki/Lieve_McCracken?oldid=9049601"
Community content is available under CC-BY-SA unless otherwise noted.