A weapon forged from the wreckage of an airship.
Loading... 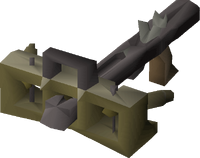 The light ballista is a two-handed ranged weapon that uses javelins as ammunition, requiring level 65 in Ranged to wield.

It is created by using ballista limbs on a light frame, then using the resulting incomplete light ballista on a ballista spring, and finally adding a monkey tail on an unstrung light ballista. The entire process requires level 47 in fletching, granting the player 330 experience.

The light ballista has a special attack, Concentrated Shot, which it shares with the heavy ballista. It performs an attack with 25% increased accuracy and damage and uses 65% of the special bar.

Retrieved from "https://oldschoolrunescape.fandom.com/wiki/Light_ballista?oldid=7424032"
Community content is available under CC-BY-SA unless otherwise noted.