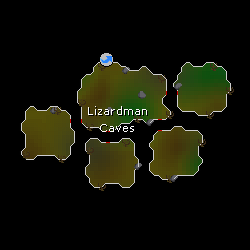 The Lizardman Caves are a series of caves located at the north-west corner of the Lizardman Settlement in the Kebos region. It is a single-combat area, but all eight of the shamans can only be killed while on a Slayer assignment.

Players may enter without a Slayer assignment, but upon attacking any monster inside the dungeon, Captain Cleive will stop them from doing so, claiming that they are not assigned to kill them.

According to Captain Cleive, there were lizardman shamans causing trouble on the surface, so he led a taskforce to drive them into the caves that they currently reside in, albeit with many casualties.

A dwarf multicannon cannot be set up in the caves; attempting to do so will display the following message in the player's chatbox: "The ground is too marshy here."

Retrieved from "https://oldschoolrunescape.fandom.com/wiki/Lizardman_Caves?oldid=9049485"
Community content is available under CC-BY-SA unless otherwise noted.