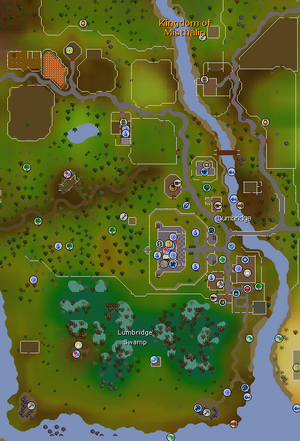 Lumbridge is the town where players begin their RuneScape journey. New players are sent here from Tutorial Island to learn the game of RuneScape from various tutors across the town. Lumbridge gets its name from the bridge that crosses the River Lum.

Buildings and places of interest

Main article: Lumbridge Castle
Duke Horacio and his advisor Sigmund are found on the 1st2nd floor[?]. The spinning wheel, used in Crafting, is also located upstairs. If you have started the Recipe for Disaster quest, there is a bank in the Cook's basement, as well as a wide variety of cooking ingredients and cooking implements to buy. Along with the Lumbridge tutors update, a free bank was added to the top floor of the castle, which is easily accessible after casting the default Home Teleport spell.

The basement is a place of interest for new players, as it has some level 2 spiders with which low level players can train and spawns of leather gloves and leather boots. It also contains the entrance to the Dorgesh-Kaan mine and the Culinaromancer's Chest, which becomes accessible after the completion of Recipe for Disaster.

Father Aereck watches over his 230+ year old church of Saradomin here. There is also an altar to recharge Prayer points and the Prayer tutor.

Main article: Bob's Brilliant Axes
Owned by Bob, this store buys and sells a limited range of axes, which include pickaxes; bronze, iron and steel axes; and iron, steel and mithril battleaxes. He also repairs Barrows equipment, axes and pickaxes for a price. The store is advertised on fliers dropped by many monsters.

South of the Saradomin Church, the graveyard is the direct link between the central zone of the city and the Lumbridge Swamp. It is full of gravestones, by which stand Nigel and Count Check. Next to is southern exit, a mausoleum house containing a coffin plays an important role in The Restless Ghost.

Useful for players using the Agility shortcut from the mine, but generally unpopular as there is no bank or mine nearby, though it is well located if you wish to string crafted amulets or symbols.

Main article: Lumbridge General Store
Run by Donie and her shop assistant, this shop sells some items useful for new players. It also buys items from players for a small amount of coins.

On the east side of the river, goblins and spiders have overrun the entire area. A building located across the river houses large numbers of level 2 and 5 goblins and an iron dagger spawn, though the entire area is crawling with spiders and goblins. This area is a very popular area for new players to start training. Between the house and the river there are a canoe station and a few fishing spots.

It is located right east of the goblin house, connecting Lumbridge and its neighbour city Al Kharid. Until the player has completed Prince Ali Rescue quest, it will cost 10 coins to pass either way through this gate to Al Kharid, though it can be avoided with a long detour north of Groats' Farm.

Farmer Fred's is an excellent place to shear sheep to obtain wool which may be spun at the castle. Onions can be collected from the farmer's garden. Also, there is a log standing on the ground outside of Fred the Farmer's house from which a bronze axe may be taken. There are also many chickens here that new players can kill.

The farm consists on a great pen full of level 2 and 5 cows and calves, which are useful for low level players who wish to train their first combat levels by directly facing other attackable monsters. They also have a 100% drop rate of raw beef, cowhide, and bones. A dairy cow is also available for milking, being part of Cook's Assistant quest.

The chicken coop is a bit to the west of the cow pasture. Chickens can be killed there, dropping feathers and raw chicken along with bones. The chicken coop is commonly used for players to train in Prayer since all chickens drop bones and are very easy to kill.

The goblin house
Community content is available under CC-BY-SA unless otherwise noted.
Advertisement