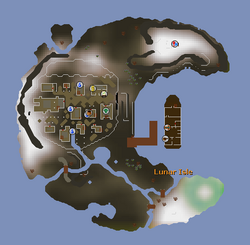 Lunar Isle is an island shaped like a crescent moon, located in northwest Gielinor. It is accessible for members who have gone far enough into Lunar Diplomacy. The Astral altar is located on this island. There is also a bank, a magic shop, a clothes shop and a little island to the east inhabited by Suqah. It is home of the Moon Clan, beings with magic coursing through their blood, who are bitterly at war with the Fremennik.

After completing the elite tier of the Fremennik Diary, players will no longer need a seal of passage to interact with the any native Lunar Isle inhabitants.

Getting to Lunar Isle