Allows players to change their gender

Master of the mystical make-over. 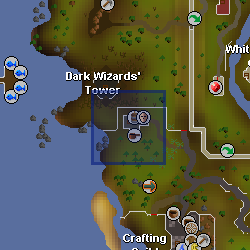 Allows players to change their gender

Master of the mystical make-over.

The Make-over mage, also known as Pete or Peta, depending on whether they are currently male or female, is a wizard whom possesses the magical knowledge to change the player's gender or skin colour, at the price of 3,000 coins. Alternatively, a Makeover voucher may be used in place of the 3,000 coin fee. Approximately every 10 seconds, they will switch genders.

The mage is located in a small cabin south-west[?] of Falador, and directly north[?] of the Crafting Guild. The house is surrounded by a herd of sheep, which when used in conjunction with the level 5 Agility shortcut through the Falador wall, is extremely close to a bank. Additionally, players may want to take advantage of the proximity of the Crafting Guild, to spin the wool gathered into balls.

By default, the options are set to the current gender and skin colour of players' characters. Click on a colour or gender to change it—either or both will cost 3,000 coins.

The Make-over mage also sells Yin yang amulets. They are non-tradeable and offer no bonuses, but can be bought for 100 coins.

If a player has completed a Hallowe'en event, the additional skin colours green, black, white, and zombie blue are unlocked.

Players who had linked their Twitch Prime account to their Runescape account between 26 July and 19 September 2018 had early access to an additional purple skin colour. This skin colour was made available to everyone in an update on 20 September 2018.

The Make-over mage is also sometimes required in the Recruitment Drive quest, where the player must defeat someone that no man can defeat. If they are male, they must go to the Make-over mage and become female. After the quest, they will be reimbursed for the 3,000 coin fee, and be given a makeover voucher, which can be used for one free makeover.

The mage was invited to Party Pete's celebration of the 4th birthday of Old School RuneScape, for which the player had to complete the riddle of "How many major accidents have I had this month when attempting to use my make-over powers?", to which the answer was "36". Once at the party, they realised that it was rather boring, and had to be bribed 100 coins in order to pretend to have fun.