Give everything to Jorral. He'll give the player a letter to take to the king of East Ardougne. King Lathas can be found upstairs in his castle in Central Ardougne just across the river. He will give back a letter to take to Jorral, in which he promises not to tear down the outpost. After taking it to Jorral, Jorral will give the player a letter which you must take to King Lathas, and then go back to Jorral for the reward. 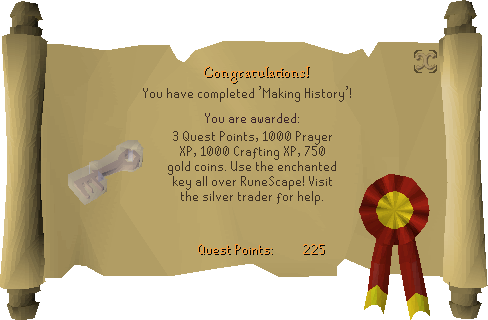 Retrieved from "https://oldschoolrunescape.fandom.com/wiki/Making_History?oldid=5635873"
Community content is available under CC-BY-SA unless otherwise noted.