Talk to Jorral in the outpost just north-west of West Ardougne. It is directly south of the Tree Gnome Stronghold. In order to save the outpost from King Lathas, the player will need to talk to Erin the silver merchant, Droalak the ghost, and Dron the warrior. They can be visited in any order, and the player does not need to visit Jorral until meeting all the characters. Before all of this, Jorral takes you into a cutscene.

Players may now teleport to Castle Wars using the ring of dueling. The key should lead the player to an area south of the observatory near the river, north of Castle Wars. The area to dig is on white flowers. Click the spade when the key is steaming hot. Use the Enchanted key on the chest to open it to get a journal, and read it to learn about a Zamorakian that used to live in the outpost who played pranks on the people of Ardougne.

Go to Rellekka. East of the Longhall, talk to Dron's brother, Blanin (He can be found near the Dairy churn in Rellekka). Go north of the Skulgrimen's shop, and speak to Dron. He can be found close to the northernmost dock. He will quiz the player on the information that Blanin gave them. Dron will ask various questions; these are the answers (in the order used): 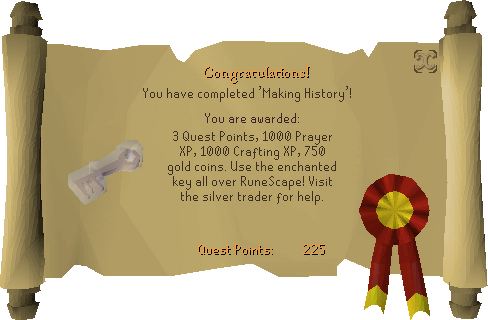 Retrieved from "https://oldschoolrunescape.fandom.com/wiki/Making_History?oldid=7362484"
Community content is available under CC-BY-SA unless otherwise noted.