A master of necromancy! 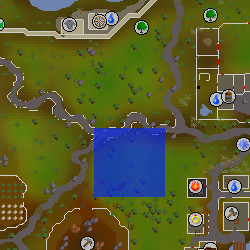 Malignius Mortifer is a necromancer just north of Port Sarim. He cannot be attacked, and has 4 apprentice wizards, one for each of the traditional elements: an air wizard, a water wizard, an earth wizard, and a fire wizard. All of these wizards are level 13. Mortifer will often try to raise the dead, but sometimes fails and creates fungus. He never summons fungus twice in a row. Occasionally, he will summon a skeleton, skeleton mage, zombie or a ghost. They will follow Mortifer if the necromancy is successful. If a player annoys him, he will cast a spell, unblockable by the best Magical protection or even by the Protect from Magic prayer, to temporarily transform the player into a mushroom. He takes part in the Swan Song and A Fairy Tale Part I quests. Mortifer calls himself a 'great practitioner' and a 'master' of the magic arts, he once triumphed over Tanglefoot, and is known to the Dark Wizard Zandar Horfyre. Mortifier also possesses knowledge of the Nature Spirit.

After the Swan Song quest, he will spare a player a brown apron and he will give bone seeds if the player has a pot with a pot lid.

If you speak to him after you have completed the Enter the Abyss miniquest, he will let on that he is a follower of Zamorak and he will tell you about the burning of the Wizards' Tower. Given that he knows about what you did for the ZMI, he is probably a member of that organisation himself.

Malignius is one of the few NPCs that can summon creatures, though if you speak to him about it, he will tell you that necromancy has nothing to do with summoning. He also mentions that Wizard Grayzag (summons Imps), Invrigar the Necromancer (at the Necromancer Tower), Sithik Ints (from the quest Zogre Flesh Eaters) and Melzar the Mad (in Melzar's Maze; necromancy drove him mad) are, or were, necromancers.

Apparently, he had "a slight accident involving a bottle of Super-Ultra-Flora-Growth-Potion" which resulted in the creation of the Giant mole.

He also sells magic secateurs for 40,000 coins after defeating Tanglefoot in Fairytale I - Growing Pains.

In the 2018 Easter event, players are required to give him burnt meat, Draynor Manor cabbage and a garlic in exchange for a growth potion.