A piece of the map to Crandor.

When the player has all the map parts in their inventory, they can use any two pieces on each other and the three will fuse to form the Crandor map.

Getting the part of the map

The first map part is located in Melzar's Maze, located south of the Crafting Guild and requires the Maze key to enter. To acquire it, the player must fight through several monsters in the maze, from Giant rats to Melzar the Mad and a Lesser demon while going through the maze's complex. The lesser demon drops the last key of the maze which will open the locked door of the room that contains a chest containing the first map part.

The second map part is sealed in a door without a keyhole in the dwarven mines under Falador. This door and room is located east of the mining shop that sells bars and ores. To open the door to this room, the player will need a lobster pot, silk, an unfired bowl (soft clay molded into a bowl but not hardened by fire), and a wizard's mind bomb. With these items, the player will be given access to enter the door and in that room, there is a chest which contains the second map part.

The third map part is in the hands of Wormbrain, a goblin jailed in Port Sarim prison. The player must talk to either goblin generals in the Goblin Village first, or else Wormbrain will neither drop nor entertain the player for the map part. After that, they can go to Wormbrain, who would sell the map to the player for 10,000 coins. Alternatively, players can kill Wormbrain and use Telekinetic Grab on the map. 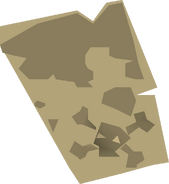 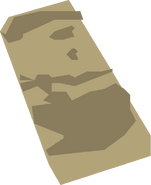 Lozar's piece
Add a photo to this gallery
Retrieved from "https://oldschoolrunescape.fandom.com/wiki/Map_parts?oldid=8689723"
Community content is available under CC-BY-SA unless otherwise noted.