You can exchange these for rewards at the Rogues' Den. 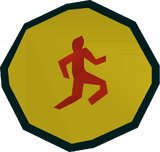 A mark of grace is a type of currency that can only be obtained from the Rooftop Agility Courses. The marks are exclusively used to purchase the pieces of the graceful outfit and amylase, which is the secondary ingredient for creating stamina potions.

Marks of grace are obtained randomly while traversing obstacles on Rooftop courses. Higher level courses have a greater chance of spawning marks. When a mark appears on the course, players have 10 minutes to pick up a mark before it disappears. Marks spawn randomly at specific locations along a course. It is possible for multiple marks to spawn on the same tile, which will stack the marks of grace and reset the timer to 10 minutes. It is also possible to obtain Marks of grace every-lap or the lap after by collecting the mark of grace then moving 1 section forward in the agility course. You would now wait 5-6 minutes then continue onto your next lap and Mark of grace.

Players who have completed the easy, medium and hard Kandarin Diary will increase the chance of receiving marks of grace during the Seers' Village Agility Course by 5%, 10% and 15%, respectively.

Completing the elite Ardougne Diary will increase the chance of receiving marks of grace during the Ardougne Agility Course by 25%.

Canifis Agility Course has the greatest chance of spawning marks for players between level 40 to 59 Agility, as it has a greater number of obstacles completed per hour than the other rooftop courses. Players should consider using this course until 60 Agility to obtain a full set of the graceful outfit. However, if a player is planning on training past 60 Agility, they should consider the Falador Agility Course. The Falador course offers 25% - 30% higher experience rates while sacrificing 7% - 10% of the marks generated.

Marks of grace can be traded in at the Rogues' Den through Grace, an NPC who sells the graceful outfit as well as Amylase packs for marks of grace. The price of each piece of grace varies, some costing more or less than others.

In addition, players can pay 90 marks of grace to recolour an entire graceful outfit, or 15 marks of grace per graceful article, to one of six different colours by talking to Osten in the Shayzien House in Great Kourend. Players can also buy a dark blue recolour by paying 250 agility arena tickets to Pirate Jackie the Fruit at the Brimhaven Agility Arena entrance.

Considering the price of Amylase crystals, a mark of grace is worth 14,190.

Retrieved from "https://oldschoolrunescape.fandom.com/wiki/Mark_of_grace?oldid=8692991"
Community content is available under CC-BY-SA unless otherwise noted.