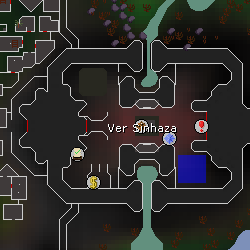 Mercenaries are NPCs found by the entrance to the Theatre of Blood. According to Safalaan, they were hired by King Roald under the mercenary protocol enacted during Darkness of Hallowvale. Players speak to them during the quest A Taste of Hope, and sometime during the events of the quest, they enter the Theatre in an attempt to complete it.

The fate of the three mercenaries can be seen within the Theatre. The mage is killed by the Pestilent Bloat, the ranger is trapped by the Nylocas and the warrior has been beheaded and thrown from the tower by Xarpus. 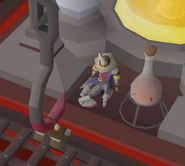 The mage defeated by the Pestilent Bloat, his feet now hangs from a hook in the ceiling. 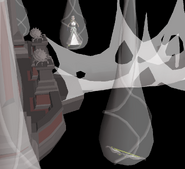 The ranger trapped by the Nylocas, with her Twisted Bow encased in another web nearby.

The warrior beheaded by Xarpus.

The promotional artwork in which the mercenaries were featured.
Add a photo to this gallery

Retrieved from "https://oldschoolrunescape.fandom.com/wiki/Mercenary_(Theatre_of_Blood)?oldid=8087616"
Community content is available under CC-BY-SA unless otherwise noted.