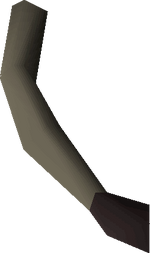 Monkey tails are a component in making heavy or light ballistae. It is dropped by demonic gorillas in the Crash Site Cavern, and can also be received as a very rare drop (1 in 5,000) from hunting maniacal monkeys with a deadfall trap in Kruk's Dungeon.

Retrieved from "https://oldschoolrunescape.fandom.com/wiki/Monkey_tail?oldid=8208791"
Community content is available under CC-BY-SA unless otherwise noted.