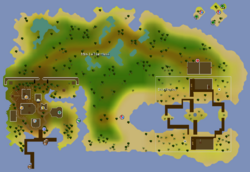 Mos Le'Harmless is a pirate base surrounded by jungle that may be accessed after completing Cabin Fever. On the isle you can play a minigame called Trouble Brewing.

To get here, talk to Bill Teach on the eastern boat in Port Phasmatys or use the charter ships.