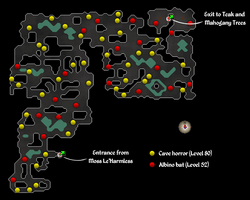 The Mos Le'Harmless Caves, also called the "Cave of Horrors", are found on Mos Le'Harmless, which players can reach only after completing the Cabin Fever quest. The caves are the only place where Cave horrors and Albino bats are found.

A light source is required in the caves, unless the player has lit a fire pit of Eternal Light near the entrance. In the north-east, two staircases ascend to small islands with teak and mahogany trees and seaweed spawns.