Mourning's Ends Part I is a quest in the elf series, continuing directly where Roving Elves left off. During the quest, you are given access to Lletya, the hideout of the rebel elves, and meet with your old ally Arianwyn. The first half of a two-part quest about stopping the mourners, it revolves around their plans in West Ardougne.

Recommended items: a weapon, food, necklace of passage to teleport to the Outpost to get to Arandar, 8 free inventory spaces.

Talk to Eluned (you might have to wait for her to appear, or you can relog to have them respawn just west of Lletya), and she will lead you to a new elven village called Lletya. Once there, talk to Arianwyn. He will tell you that the Mourners in West Ardougne are really elves from the capital city, and it's your job to uncover their evil plot. He will also tell you about the elves crossing the overpass of Arandar. You'll also get a teleport crystal that teleports you to Lletya four times (you can pay Eluned to recharge it after you've used it up), and you'll be able to enter and exit the city at will by passing some strange looking trees in the south-east area of the forest (one of the spawn points for the Roving Elves).

At this point, it's recommended you leave using a necklace of passage, however, If you try to enter Prifddinas from the front gate, the guard will tell you no humans may enter while the Mourners are at large, so you need to get in from the side entrance.

Go to the entrance of Arandar (the mountain entrance on the map that leads into the side of Prifddinas) using a Spirit Tree to Gnome Stronghold or a Necklace of Passage to the Outpost and kill a level 11 Mourner near the gate. Before the battle, it will throw a potion at you that will reduce all of your Combat stats including Hitpoints to 20. You should still be able to kill it if you have a good weapon. It should also be noted that you can kill the mourner in one hit to avoid fighting it with reduced stats, but the stat reduction will still occur. The Mourner will not spawn if your health is below 20 as you approach the gate. After it dies, you'll get a gas mask, a bloody mourner top, damaged mourner trousers, mourner boots, mourner gloves, a mourner cloak, and a mourner letter. You will need all of these items. As you have ripped the trousers and got the top all bloody, you will need to repair and clean them before they can be worn.

You may now want to go to the Clan Wars FFA portal using a ring of dueling to restore your stats and take out your bucket of water from the bank/chest.

To remove the blood stains from the top, go to Taverley. Talk to Tegid, who is doing his laundry by the lake. He will tell you about his special soap, which he won't let you have. Steal it from his laundry basket (level 50 Thieving required). With that and a bucket of water, wash the blood stains out. You can now wear the mourner top.

To fix the trousers, go back to Lletya, and talk to the elven seamstress (Oronwen). Give her two silk and one bear fur, followed by the damaged trousers (use each item on her). She will mend them and give them back to you.

At any point in the quest when a character asks you to "wait a minute" or some variant thereof, you can just relog to avoid waiting.

Buy dyes while you're in town. You only need one of each (red, yellow, green, and blue), but you could buy more dyes from her shop, just in case you miss your target sheep while firing with the Gnome device.

Wear the mourner gear, take the mourner letter, feather, soft leather, magic logs and toad crunchies. Take off all of your other items, and go to the Mourner HQ in West Ardougne that you went to during the Biohazard quest. It is the most northeastern building in West Ardougne. You can now access the basement, where you'll find level 108 Mourners and the real head mourner. Talk to the head mourner and show him your letter. Welcome to the Death Guard!

He will tell you that the Mourners' job is to keep people believing in the plague. Recently, they dyed four of Farmer Brumty's sheep with a gnomic device. However, the colour is starting to vanish and they need redyeing. Normally, they use a gnomic device, but it has broken down and the gnome won't tell them how to repair it, and he'll give you the broken device. Go into the torture room next door, using your tarnished key, and talk to the gnome on the rack.

He will eventually tell you that he hates having his feet tickled and loves toad crunchies. Make sure you answer those two things at the end of the conversation, otherwise it won't work. Do not give him the crunchies first, or else he will eat them and you will need to get some more! Use your feather on him to tickle his feet; then, do it again and bribe him with the crunchies. After you get him off the rack (talk to him once more, then use the "release" option; the mourner guard in the room will protest at first, but eventually he'll allow you to release the gnome), he will ask you for a piece of soft leather and a magic log. He will use those to repair the device, which looks like a bazooka.

You now need some ammunition. Any swamp toad location will do, but the easiest way to do this is to use fairy ring BKP, as some swamp toads are immediately northeast of this location. Alternatively, use a ring of dueling to teleport to Castle Wars and run south along the coastline, then west. Near the swamps, you can find toads. Use each of the dyes on the empty bellows, and use the dyed bellows on a toad to get a toad of each colour.

Go north of Ardougne to the coloured sheep (examine them to find out their colour).

Use the coloured toads on the launcher to load it. After loading the toads, go to Combat Options (crossed swords tab). Choose "Aim and Fire". Find one, aim at it with its respective colour , and press FIRE!

Successfully firing at one of the sheep will coat the entire herd.

If you are having trouble hitting the sheep, switching from Resizeable Mode to Fixed Mode may solve any issues you encounter.

After you've redyed all four, return to the head mourner. He will tell you that someone poisoned their stew recently, causing them to get plague-like symptoms. He will tell you that he wants some citizens to get a non-lethal version of the plague. You need to make the poison and poison two out of three food sources.

Take a rotten apple near the Mourner HQ (just north-west); then, go to Elena (her house is in the north-west in East Ardougne, the nearest to the log balance shortcut). She will tell you how to make the poison after you tell her the entire plague city storyline and show her the rotten apple (do not eat the apple!). She will also give you a sieve.

If you already have a barrel of naphtha, skip to § Mixing the naphtha with the apples.

You now need to add a solvent to make it nonlethal and undetectable. Take another barrel from the apple orchard or Tyras Camp, and use it on the coal tar swamp in the elf kingdom to get a barrel of coal tar (see exact location on the left). Then, get about 10 - 15 regular coal and go to the Chemist's house in Rimmington.

A simple step-by-step guide for this part is:

The bar on the bottom should start turning green. When it is full, stop adding coal and close the window to replace your empty barrel with a barrel of naphtha.

Mixing the naphtha with the apples

Use the barrel of naphtha on the apple barrel to get a naphtha apple mix; then, use your sieve on it to obtain a barrel of toxic naphtha. Use it on a range, not a fire. (There is one in the south-west part of the main square in Ardougne. Alternatively, the range in the Mourner HQ could be used.)

You will then get two toxic powder heaps. Use these on two of the grain sacks in West Ardougne, either in the general store in the south-west corner of the city, the church, or inside the office north of the manhole. Go back to the head mourner. He'll tell you that their plan is to go into the mountains, and use the plague victims as slaves to help them dig into a temple that will make it easier to resurrect a Dark Lord. 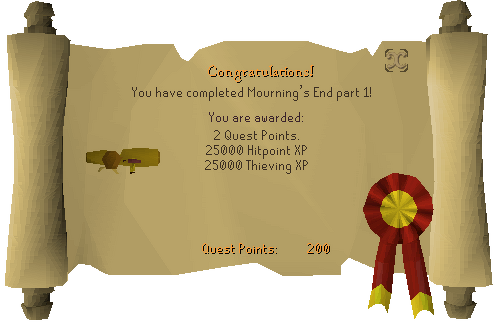 Completion of Mourning's Ends Part I is required for the following: