Items needed: Climbing boots or 12 coins, one bucket (can be found next to the cooking pot at Death Plateau)

Travel to the Troll Stronghold, and speak to Burntmeat in the kitchens; he's on the south side on the floor below the one you enter. He has heard that humans can grow goutweed, and wonders if you can help. You should see a short cutscene with a fellow adventurer in a cooking pot, and his dragon armour strewn over the floor. He wants his assistant to learn how to farm, and his assistant is called My Arm. My Arm is at the back of the room; talk to him, and he will tell you he needs the goutweed lump from the cooking pot at Death Plateau. My Arm will tell you to talk to Burntmeat who will give you directions for getting to Death Plateau (though it is probably quicker to use a games necklace). There's two ways of getting there, but regardless of which way you choose, you will need the climbing boots. Be careful, as there are several large aggressive mountain trolls in this area, so wearing decent armour is recommended!

Follow Burntmeat's instructions. Head north through the door, and go east through another door before proceeding downstairs. You're now down by the jailcells, go all the way south past the two troll guards, and exit the caves. Once you're out, head east and climb over some rocks. The path will split up, head down the southern one and climb over some more rocks (there's a mountain goat down this path). Finally, go east and climb down to Death Plateau.

Use a games necklace to teleport to Burthorpe with some coins; travel to the west, and buy some climbing boots off Tenzing for 12 coins. Then, climb up to Death Plateau, and use Protect from Missiles along the way past the injured soldier.

Once there, pick up the bucket in a nearby hut, and search the cooking pot to get the Goutweedy lump. Travel back to the Troll Stronghold, and talk to My Arm again. He will take you outside to the roof, where he does his farming. Speak to him again when you're up there, and he will give you a farming manual.

You now need to get three buckets of Ugthanki dung, and seven supercompost, if you haven't brought those already. There are two ways to obtain Ugthanki dung.

Travel to Al Kharid, wear your camulet, and talk to the camel just outside the bank, he will produce some dung for you, you will need three buckets and a spade to collect it. Simply use the buckets on the dung to collect it. Note: If you have lost your camulet, you can get another one by talking to Lazim on the top floor of Enakhra's Temple.

If you haven't got a Camulet nor done Enakhra's Lament, you can head to Pollnivneach and get some there. Get the red hot sauce and use it on the food trough, wait a bit and you will see dung on the ground, you will need three buckets and a spade to collect it. Simply use the buckets on the dung to collect it.

Once you have the Ugthanki dung and 7 buckets of supercompost, head back to My Arm, who is on the roof of the Troll Stronghold. The ladder up to the roof is by the troll generals. Treat the patch with seven supercompost and three Ugthanki dung while carrying a spade in the inventory. The patch is indicated by a farming icon.

Note: The Fertile Soil spell from the Lunar spellbook does not work.

Items needed: None if you already have 60% favour in Tai Bwo Wannai Cleanup. If not, you´ll need a machete, or at least 60 coins to buy one from the store north-west of the village.

Talk to My Arm - you now need to go to Karamja to get some goutweed tubers from Tai Bwo Wannai. You'll see a short cutscene on the docks of Ardougne, and a scene on the ship. Once you arrive at Brimhaven, My Arm will run off to be sick, he says he will meet you at Tai Bwo Wannai. Find My Arm just east of the general store and north of the calquat patch. Talk to him and then head to the village.

Go south to the shop, buy a machete and an antipoison potion (if you haven't already gotten 60% favour), go towards the general store, and you should find My Arm again east from the general store. Go southeast and talk to Murcaily, who is found right next to the gate to the Hardwood Grove. He runs the Tai Bwo Wannai Cleanup game. He will let you have some hardy goutweed tubers if you get 60% in the cleanup game. Get 60% in the cleanup game. If you ever plan on completing the Karamja Achievement Diary, it might be a good idea getting 100% favour (a medium task) before spending the 60% on the goutweed tuber.

Talk to My Arm again - he suggests you go back to the bank to get some food because of some "large birds" on top of the mountain. Say goodbye briefly to My Arm at the Ardougne docks, and go to the bank. You will need to ensure your tool leprechaun is fully stocked with tools, and also take a plant cure and a spade with you. You should take good armour and a weapon, plus decent food. Prayer potions will help a little, but food should be your main priority.

Items needed: Hardy gout tubers, 17 coins or a rake, seed dibber, plant cure, spade, and compost or supercompost. Remember to bring food for the boss fight to save time.

Go back to the top of the Troll Stronghold where My Arm is. You need to give My Arm the stuff to plant his tubers, as if you were planting them yourself. There is a tool leprechaun nearby on top of the mountain so you can retrieve or buy tools as necessary from him. However, the leprechaun disappears during the fight (in a moment), so remember to take a spade out too if you don't already have one! In order, you need to give My Arm:

After the goutweed is planted, a certain drunken dwarf will appear, before getting unceremoniously hurled off the roof of the stronghold by My Arm and eaten by an unnamed troll child.

After the goutweed finishes growing, a bird will swoop down and attack - it is only a level 75 Baby Roc and defeating it should be fairly easy. Beware the boss fight takes place in an instance; therefore, you cannot go back to get your items after dying.

Warning: Once you have killed the little Roc, a far more dangerous level 172 Giant Roc will attack. It uses both strong Melee attacks, which blast you backwards unless you have your back against a rock, and Ranged attacks as well. It is recommended that you use Protect from Missiles prayer, and eat when required. (The Roc's ranged attack is dodgeable, but requires a good rhythm which is messed up every time the Roc pushes you around.) If you move several spots away before the rock hits, you won't take damage. My Arm will also attack the bird, but his attacks only tend to hit 1 or 2, so don't rely on this. (You can use magic, but he has weaknesses to melee and ranged.)

Once you have killed it, talk to My Arm again; he now needs a spade to dig up the goutweed, and then, he will tell you to talk to Burntmeat. If you forgot to withdraw a spade even after the previous warnings, go down the ladder and then back up - the leprechaun will have returned. Talk to Burntmeat, he will give you a great reward - you guessed it, a full inventory of burnt meat!

Talk to My Arm again to get some better rewards and finish the quest. 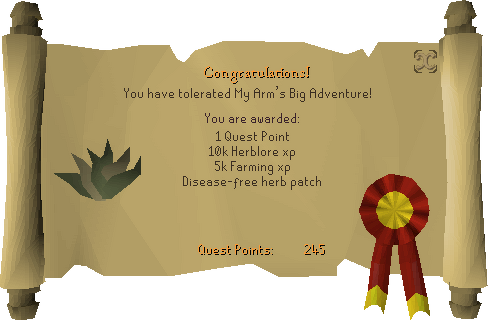