Talk to Drezel, where you left him at the end of

Priest in Peril (beside the holy barrier to Morytania, under the temple).

Drezel will give you three

apple pies to take to

ghasts that will rot your food. Do not worry about this since you don't actually end up giving Filliman the food. Go south-east after exiting the temple. Note: You must enter Morytania through the gate, or Filliman will not appear.

Ignore the warning and go through the gate to reach the swamp. Go south along the west river until you see the grotto tree. WARNING: You will find ghasts in the swamp, which are barely visible spirits that will attempt to rot your food. They often miss, and if you run out of food, they will hit damage on you. You also lose about 3 health at random times when in the swamp. This will not happen on Filliman's island or in

Filliman's Grotto. Jump across the broken bridge to the grotto. You may lose upwards of 7 health trying to get across this.

It turns out that he has died and is now a

ghost, so put your

washing bowl off the nearby table to find a

mirror underneath. Take the mirror and use it on him. He will now believe that he is a ghost. After this, he tells you to find his

journal. Search the grotto tree to get it and give it to him.

Filliman will tell you that he wants to become a Nature Spirit, but he needs your help to complete the transformation. He will give you a

spell scroll that you can use to cast a

Drezel and ask him to bless you. After he has blessed you, he will say: "when I look at you, there does seem to be something of the faith about you."

Drezel has blessed you, using the

Druidic spell and with the

Silver sickle equipped or in your inventory, find a rotting log in the swamp and cast the spell next to it to make a mushroom grow. Pick it and show it to

Filliman, and he tells you that the mushroom is Something of nature.

At Filliman's grotto, use the mushroom on the light-brown (western) stone and the used spell card on the grey stone. Summon Filliman again if needed by trying to enter his grotto, then, while standing on the orange stone, tell Filliman you think that you have solved the puzzle. Filliman will complete half of his transformation and ask you to come inside the

grotto. Note: You must use the mushroom and used spell card on the stones, not drop them.

Go inside, and search the grotto in the middle of the cave. Filliman will turn into a Nature Spirit. He will then ask you to get a

Silver sickle (b) and tell you that you can bless other sickles in the future simply by dipping them in the grotto water. He will also give you a

Druid pouch and tell you to kill three 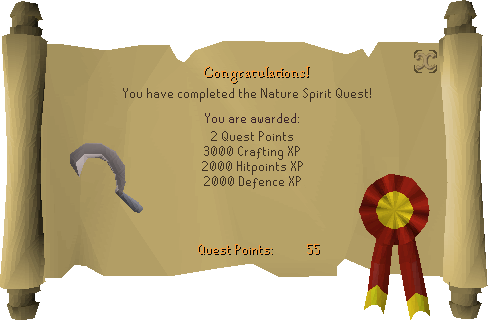