He looks out of place. 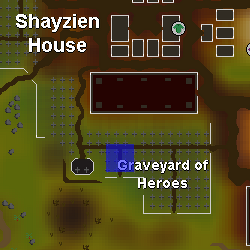 New recruit Tony is an NPC who is hiding from the drill instructor in Shayzien House's graveyard in Great Kourend. He believes the training to be too intense and refuses to return until the drill sergeant finishes the training session.

He is a Shayzien House soldier, who as a child, wished to live in the Piscarilius House and become a fisherman for a living, sailing the oceans. However, due to his parent's hatred of the people of Piscarilius, he was forced to become a soldier in order to bring honour to the Shayzien House.

Tony is the solution to the master anagram clue: TWENTY CURE IRON. He will then give the player either a puzzle or light box.