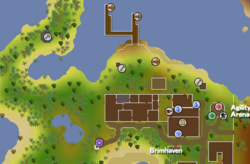 The North Brimhaven mine or (also known as the horseshoe mine or Karamja north-western mine) is located on the peninsula north-west of Brimhaven. The mine has ten gold rocks from which players may mine gold ore as well as a single gold ore spawn. The mine is in a members-only area. It is worth noting that there are several Poison Scorpions in the area (they will automatically attack you unless you are combat level 41 or higher).

Players may get to this area quickly from the Fisher Realm by blowing a magic whistle and then walking a few steps south.

If the Shilo Village quest is finished, then this is the best place on Karamja to mine gold. (You will need money for the cart fare to quickly access the Shilo Village bank.) Mine a full load, run to Brimhaven, use the cart system to Shilo Village, deposit the gold ore, and return to the mine. Alternatively, players can use an Amulet of glory to travel to Edgeville, bank there, and use the Fairy ring to access the Fisher Realm and run south to the mine. Yet, another alternative could be to use the Glory to Edgeville or the Ring of dueling to Castle Wars to bank, then use a House teleport if your house is in Karamja to run a bit north to the gold mine. Players may also bank by returning to the Fisher Realm by running back between the four posts to the north of the mine and blowing the whistle. Then use the fairy ring in the Fisher Realm to bank in Zanaris and return again via the same route.

Retrieved from "https://oldschoolrunescape.fandom.com/wiki/North_Brimhaven_mine?oldid=8689430"
Community content is available under CC-BY-SA unless otherwise noted.