Not to be confused with Mysterious Old Man, Weird Old Man, Strange Old Man, or the Wise Old Man. 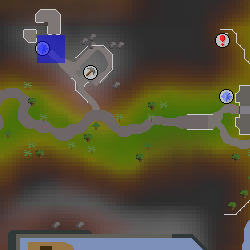 The Odd Old Man (real name: Archibald Paldock) starts the Rag and Bone Man quest. He collects bones, furs, teeth, and similar items for what was previously an unknown purpose. The bone sack on his back appears to talk to him and tell him what to say. He says he works for the Varrock Museum, bringing stuffed creatures to put on display, but his phrasing suggests he is misleading the player, to hide the real reason why he wants these items.

The Odd Old man gives you either a bonesack or ram skull helm when you have completed Rag and Bone Man II.

He is located at the Paterdomus mining site, also known as the limestone quarry, north-east of Varrock.

Odd Old Man is the solution to the hard anagram clue: LAND DOOMD. He will then ask you to solve a puzzle box.

Retrieved from "https://oldschoolrunescape.fandom.com/wiki/Odd_Old_Man?oldid=8687806"
Community content is available under CC-BY-SA unless otherwise noted.