Start a Wiki
RS
This article is about the treasure hunter NPC. For the bard in Rellekka, see Olaf the Bard. 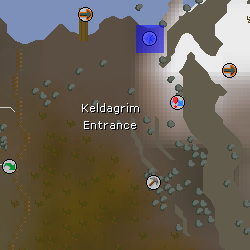 Olaf Hradson is a Fremennik who wants to be a treasure hunter. He set sail across the sea using a map that had been given to him many years ago, but because he set sail during a storm, his boat was wrecked and he washed back up on shore. This experience left him afraid and he decided against his aspirations of finding hidden riches. However, he does not want his family to know that he has failed and bring shame to them, so he asks the player to help him, and fake his success to his wife, Ingrid Hradson and son, Volf Olafson.

He provides the player with the treasure map he used, which leads to the site of the treasure and the Brine Rat Cavern quest. However, it is guarded by undead Skeleton fremenniks who have perished trying to find the treasure and Ulfric, their leader. After Olaf's Quest, Hradson has no further uses ingame, and remains in the northern Fremennik Province with the remnants of his boat.

Retrieved from "https://oldschoolrunescape.fandom.com/wiki/Olaf_Hradson?oldid=8209223"
Community content is available under CC-BY-SA unless otherwise noted.