Some old notes found on Crandor/Ungael/Lithkren. They're written in a strange text. 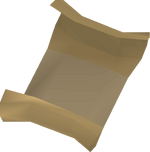 Old notes can be obtained during the Dragon Slayer II quest. The notes are written by Zorgoth, a dragonkin, noting his experiments to enhance the strength and aggressiveness of dragons in order to turn the tide on the war on humanity during the Fourth Age.

Retrieved from "https://oldschoolrunescape.fandom.com/wiki/Old_notes?oldid=8209209"
Community content is available under CC-BY-SA unless otherwise noted.