Items required: A Lumbridge teleport (optional),[1] Falador teleport (optional),[2] a Varrock teleport, 3 steel bars, a harralander, 2 guams, a marrentill, a bowl of hot water (Farmer Fred has a water source; Farmer Seth has a range to boil), an empty cup (You may obtain a cup of tea during this part, and drink it), 5 pigeon cages and a Camelot teleport, a lockpick is recommended for those with a low Thieving level.

Items required: Coins, a Camelot teleport, an Ardougne teleport, a ring of dueling, a chisel and some extra jades, opals and red topazes, and sapphires. 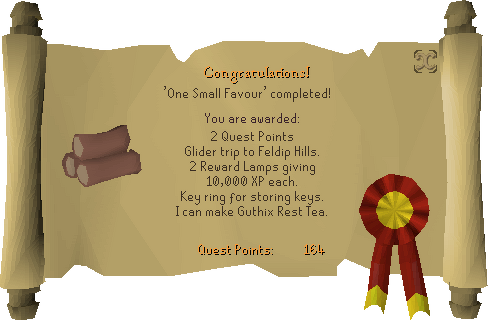 Retrieved from "https://oldschoolrunescape.fandom.com/wiki/One_Small_Favour?oldid=6999327"
Community content is available under CC-BY-SA unless otherwise noted.