A ranged store type of monkey. 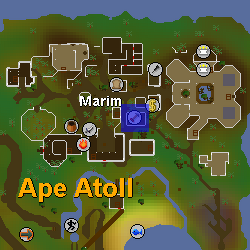 Oobapohk is the owner of Oobapohk's Javelin Store on Ape Atoll. However, he will only sell javelins when Monkey Madness II is completed; he claims to have run "out of stock" otherwise.

When you ask him if he could sell you some dragon javelins, he responds with "Dragon javelins? Haha, you'll be a chief advisor to the King before you ever hold a dragon javelin!", referencing the dialogue to Zeke, who says something similar when asked if he sells dragon scimitars. Despite this, players do not require the completion of Monkey Madness II to wield dragon javelins.

Retrieved from "https://oldschoolrunescape.fandom.com/wiki/Oobapohk?oldid=8209183"
Community content is available under CC-BY-SA unless otherwise noted.