RSCRS
Not to be confused with Light orb.

A magical sphere that glimmers within. 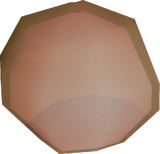 An orb of light, also known as a Sphere of Light is a magical orb used in Underground Pass quest. The player must destroy four of these orbs in a furnace in order to be able to progress to the next part of the dungeon.

Orbs of light were created by Saradominist mages as a beacon of safety for travellers, boosting faith and courage and bringing out the innate goodness in one's heart, and also bringing fear and pain to those aligned with the dark side. They were placed in the Underground Pass by the warrior Randas before being destroyed by the player in the Underground Pass quest.

Retrieved from "https://oldschoolrunescape.fandom.com/wiki/Orb_of_light?oldid=8209149"
Community content is available under CC-BY-SA unless otherwise noted.