His family's never been especially short of food. Or drink. 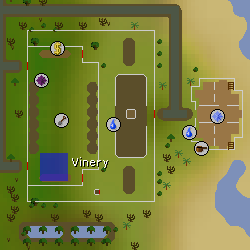 Pandur Hosidius is the son of Lord Kandur Hosidius, the current lord of the Hosidius House. Ever since he was a child, he was the official taster of various foods, such as bacon, beef, pies, and beer. Due to Pandur's occupation as a taste tester, he has become intoxicated with his father's experimental wine within the Vinery. His father successfully grew a new strain of grapevine in order to produce better wine to sell to the dwarves in the Lovakengj House, and will only allow players who have gained 65% favour within the Hosidius House to grow grapes.

Retrieved from "https://oldschoolrunescape.fandom.com/wiki/Pandur_Hosidius?oldid=8209089"
Community content is available under CC-BY-SA unless otherwise noted.