View source
watch 02:40
World of Warcraft: Dragonflight - The Loop
Do you like this video?
Play Sound
RS
This article is about Pyramid Plunder minigame reward. For the Stronghold of Security reward, see Skull sceptre. 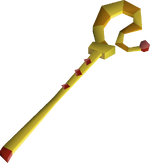 Pharaoh's sceptre is a staff found during the Pyramid Plunder minigame in Sophanem. It requires 30 Attack and 30 Magic to wield. This can be used to teleport to the three pyramids found in the desert, and by default, it can have up to three charges. Players who complete the Desert Diary can have the sceptre hold more charges, up to eight with full completion.

Teleporting by using this sceptre works up to level 30 in the Wilderness. When it's out of charges, talk to the guardian mummy inside the Pyramid Plunder pyramid, and give it either 6 gold artifacts, 12 stone artifacts or 24 pottery/ivory artifacts to recharge it.

Pharaoh's sceptres are rarely received from the golden chests and sacrophagi during the Pyramid Plunder minigame. The chance of receiving a Pharaoh's sceptre (1/1,000) is the same for every room upon a successful theft (meaning no scarabs or mummies appear). After being found, the player will immediately be kicked from the pyramid by the guardian mummy. If the player has no free inventory spaces, the sceptre will appear under them outside the pyramid.

Unlike most items, the sceptre disappears after 30 seconds if it is dropped to the ground after receiving it, so players should be careful to pick it up quickly.

With the Player Owned Houses update, the sceptre is required to make an occult altar in one's own POH. This, in turn, caused the sceptre to be in high demand, giving it a significant price boost.

The sceptre can be used to teleport to the following pyramids:

When the sceptre's charges are used, it may be recharged by using it on the Guardian mummy in the Pyramid Plunder minigame, with appropriate artefacts in the inventory (noted artefacts work). He will complain about the player owning it, but will go ahead and recharge it anyway. It is recommended that when a player has used all but one of the sceptre's charges, the last charge should be used to teleport to Pyramid Plunder for this reason.

If players have multiple types of rewards in their inventory, e.g. stone seals and stone scarabs, and they select to recharge, the mummy will take the items with the lowest value first (of the selected category).