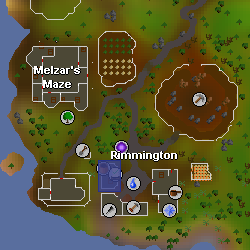 Phials is an NPC located next to the Rimmington General Store in Rimmington who will un-note items for five coins per item.

Phials is commonly used by players training Prayer on a gilded altar in a player-owned house due to his proximity to the Rimmington house portal. He is also useful for training Construction.

These NPCs would be intended for the use of Ultimate Ironmen, though other players could also use them to un-note items without risk of anyone taking them. NPCs would be added to the general stores in Rimmington, Pollnivneach, the Bandit Camp and Jiminua's Jungle Store on Karamja.

Phials could likely be the brother or relative of Niles, Miles, and Giles as they all have rhyming names, and they look very similar.

Retrieved from "https://oldschoolrunescape.fandom.com/wiki/Phials?oldid=8211138"
Community content is available under CC-BY-SA unless otherwise noted.