Talk to Redbeard Frank (located on the northernmost Port Sarim dock). He wants you to get some Karamja rum before he'll tell you the location of the treasure.

Walk south on the docks to see three sailors (walk past the monks who also offer you a fare). Talk to any one of these sailors to board the ship to Karamja for 30 coins. After paying the fare and sailing to Karamja, click on the gangplank to exit the ship.

The island of Karamja

Once on Karamja, make your way west towards the Karamja Wines, Spirits, and Beers bar. This is depicted by a beer glass on the minimap. Walk inside and trade with the bartender Zambo. Buy one Karamjan rum for 30 coins.

Go back towards the ship, but before you reach the customs guards, go north to talk to Luthas, the owner of the banana plantation. Talk to him, and ask if he could offer you employment, and he will hire you as his worker. He also says that his crates are not searched by the customs guards if you ask him about the customs officer. So, he wants you to put some bananas inside his crate outside his store. Agree to help him. Walk outside his store and then go back west and enter the banana plantation beside his house. Click on the banana trees to obtain bananas; grab 10.

Next, walk towards the crate outside Luthas' store. Use your rum with the crate to hide it. (If you get a message saying "Why would I want to do that?" try logging out and in, then try again) Next, use the bananas with the crate, or right-click "Fill Crate." When you can no longer put any more bananas in your crate, talk to Luthas and obtain your payment of 30 coins. Ask him where the crate goes, and he will tell you they go to a person named Wydin, who owns the food store in Port Sarim. So, talk to the customs officers and pay the 30 coins to go back to Port Sarim.

Back at Port Sarim

When you get off the ship, head over to Gerrant's Fishy Business. On the back wall, you should find a white apron hanging up; take it and equip it.

Next, find the food store in the building just south of the fishing shop. Talk to Wydin and ask to work for him, and if you have your white apron equipped, he'll agree. Enter the room and search the crate with a banana on top of it in the back room. You should find your rum. Take it and give it to Redbeard Frank.

Frank will give you a key to a chest that is upstairs in the Blue Moon Inn (don't use lumbridge teleport or you will lose your key, however another can be obtained from frank), in Varrock. Make sure you pick up the key before you go to Varrock, and near the southern entrance, the Blue Moon Inn should be just to the east. Go upstairs in the bar, and look for a chest in the south-western room. Use the key you got from Frank on the chest to obtain a pirate message. It will give you a clue to the treasure's location. Be sure to read the clue. Teleport, or travel to Falador.

Before you do the following, get a spade if you don't already have one.You can also get a spade from the house just south of Falador Park. You can buy spades at farming stores, and they spawn in a number of locations. The best spawn to retrieve your spade is in a house south-west of Falador Park that has a house icon on it. Once you have a spade, go to Falador and look for the park. It is north of the eastern bank. It is very large and cannot be missed.

Now, look for a statue of Saradomin. Look at where he is pointing. You must remember though, that he is NOT in fact pointing directly at where you should stand. Look at how the configuration of the dirt makes an X. Stand in the middle of the dirt "X" and click on your spade to dig.

A gardener will then start fighting you. Kill him, or run out of the park and then run back in, and then dig again in the same spot to get a casket and complete the quest! (Simply digging up the treasure will complete the quest.) Open the casket for 450 coins, a gold ring, and a cut emerald. 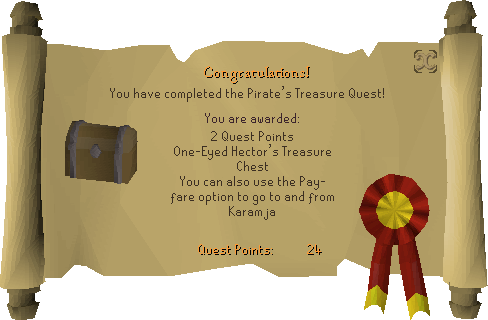 Retrieved from "https://oldschoolrunescape.fandom.com/wiki/Pirate%27s_Treasure?oldid=11123918"
Community content is available under CC-BY-SA unless otherwise noted.