Not to be confused with Piscatoris Fishing Colony.

Down by the Docks 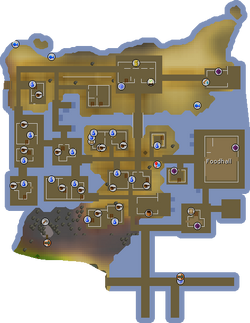 The Piscarilius House in Great Kourend are fishermen who rely on the fishing industry for their source of income, in addition to overseas trade. All visitors from the mainland come through here.

The Piscarilius House's architect is Piliar, who is found in the building north-west of Leenz's General Supplies.

Earning the favour of the Piscarilius can be done by assisting the Piscarilius Elders with repairing the fishing cranes, taking fish to the market, hunting grubs on the beach and stealing booty from houses.

At 20% favour it is also recommended to complete The Queen of Thieves quest for a quick 10% favour that will help unlock collecting sandworms at 30% favour.

Once you've earned 100% favour of the Piscarilius house, players are able to catch anglerfish, which requires 82 Fishing. Favour can be locked by talking to Piliar, who is located north-west of the general store.

There are five fishing cranes which can be repaired. Fishing cranes are found throughout the Piscarilius House, and consistently break. In order to repair them, players must be at least level 30 Crafting and will receive three times their Crafting level in Crafting experience after each crane is repaired.

When repairing cranes, it is important to only fix the crane that the NPC is also working on. It can take anywhere between 5-18 seconds to repair a crane when working with the NPC.

Repairing a crane solo, without the NPC present can take upwards of 2 minutes.

Players will need a hammer, some nails (preferably mithril), and three planks to repair the fishing cranes. Each crane fixed is rewarded with 0.5% favour. Leenz sells iron nails if players need them.

The more people that are working, the faster the crane gets repaired, so it is recommended to repair cranes with other people, likely found in busier worlds.

It's recommended to stay at the two cranes by the general store. Don't bother hopping worlds, they break again very quickly, it's better to stay with the crowd.

Planks can be sold to the general store for 0 coins and bought back for 1 coin, saving bank trips. This does not work for ironmen due to the store becoming overstocked.

Once players reach 15% favour, players with level 15 in fishing can assist Frankie in delivering fresh fish to the cooling chest inside his store for favour. Fresh fish degrades into nothing after a minute or so, so players must be fast.

It is recommended to collect fresh fish from the three barrels directly west of Frankie. Players can pick up around 20 fresh fish before they start disappearing (but you can do 25 if you are good at it). Players gain an average of 0.2% favour per delivery.

Once players reach 30% favour, players with level 15 in Hunter can hunt for sandworms (10 Hunter xp per find) in the area north of Tynan's Fishing Supplies. Doing so requires a spade and at least five buckets. Each bucket of sandworms delivered to Tynan rewards around 0.3% favour. The shop also has a large stock of buckets. It's recommended to bring coins, as he will take the bucket instead of emptying them.

After the rate at which sandworms are caught was increased in the update of November 3 2016, the chance of obtaining sandworms is between 65% and 75%.

In order to dig up the worms faster, a technique can be used to save 1-2 game ticks per action. Click *walk here* on the square that the sandworms are showing, and then quickly click on the spade item in your inventory. Once the animation begins, the player can begin running to the next location. If the worms are clicked on directly, the player will run adjacent to the worms, then WALK on top of them, and then begin digging, which is quite a bit slower.

Once players reach 75% favour, players with level 49 in Thieving can talk to Captain Khaled in the huge building south-east of the bank to get an assignment. Players will need a lockpick to pick the lock on the drawers, and they will have to avoid being caught by the patrolmen. A successful heist awards a few hundred coins, and 2% Piscarilius favour. In addition you earn 750 Thieving xp for successfully picking the lock and retrieving the booty item and additional Thieving xp equal to 40 times your thieving level for safely delivering the booty item to Captain Khaled. Note, if you logout after acquiring the booty item but before you safely deliver it you will report to Khaled that you lost the item and will have to get another task.

Players with level 49 Thieving and 75% favour with the Piscarilius House can engage in stealing artifacts from those living in the residential district. Players must use a lockpick to steal artifacts (stolen pendant, stolen garnet ring, stolen circlet, stolen family heirloom, or stolen jewelry box) from the assigned house and smuggle them out without attracting the attention of constantly moving patrolmen and patrolwomen. If players are caught with stolen goods, they will be relocated near the Kourend guards south-west of the general store.

Players who successfully smuggle the stolen goods will receive 600-1,000 coins from Captain Khaled along with Thieving experience (appropriate to the player's Thieving level) and 2% favour towards the Piscarilius House.

The residential section of town is found in the southwestern-most section of Piscarilius and consists of 6 buildings on 4 docks over the water.

The artifacts are located up the ladder in a drawer. For the south-western house, wait till the patrolwoman is walking away from you, then run to the spot in the first image. 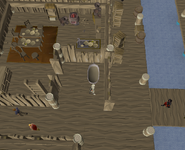 Stand here until the both the eastern patrolman and northern patrolman face away from you, then run to the spot in the next image. 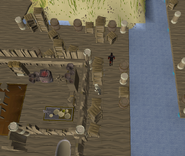 Once the patrolman is south of you and facing away from you, run away from the residential district.
Add a photo to this gallery

If stealing an artifact at the northern house, wait till both the patrolman circling around the house and the patrolwoman north of the house are walking away from you before moving to the spot in the second image. 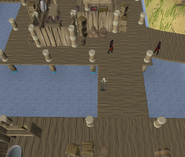 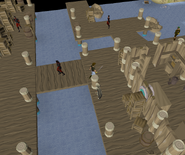 Once the patrolwoman and the patrolman west of you are facing away from you, quickly run to the spot in the next image. If it appears the patrolman circling around the house will be able to catch you, wait until he won't be able to do so while running to the next spot. 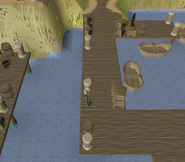 Here, the patrolwoman must be walking away south of you, and once the patrolman is walking east, facing away from you, run away from the residential district.
Add a photo to this gallery

Tynan sells basic fishing supplies, including sandworms, which are required for catching anglerfish. This is the only way to buy sandworms other than from the Grand Exchange or other players. The higher one's favour is, the lower the prices of items are.

Frankie's shop sells various types of raw fish. However, there is no stock of any fish, until one gains enough favour. The more favour is gained in Piscarilius house, the more stock is available. 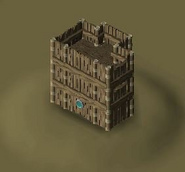 Piscarillius House houses being worked on

Model of a Piscarillius House wall and roof

Work-in-progress houses
Add a photo to this gallery

Retrieved from "https://oldschoolrunescape.fandom.com/wiki/Piscarilius_House?oldid=9944489"
Community content is available under CC-BY-SA unless otherwise noted.