View source
watch 02:53
GTA: The Criminal Enterprises - The Loop
Do you like this video?
Play Sound
RS
"Pisc" redirects here. For the Zeah House of Great Kourend, see Piscarilius House. 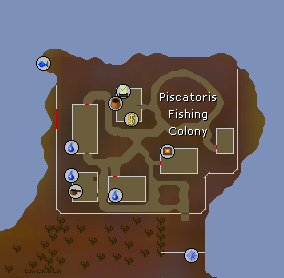 The Piscatoris Fishing Colony is located north of the hunter area north of the Eagles' Peak. It can be reached by talking to Kathy Corkat outside of the west fence of the Tree Gnome Stronghold. Kathy will take players up the river for free if they have a ring of charos (a) or if they pay her 50 coins . Alternatively, Piscatoris can be reached through fairy ring code AKQ provided the player has partial completion of Fairytale II - Cure a Queen. Swan Song must be partially completed in order to enter.

The colony once thrived on the monkfish industry but has recently come under attack from sea trolls. Players get a chance to help the town during Swan Song. After completing the quest, players may fish for monkfish from any of the fishing spots along the colony's northern coast. Players are also able to fish for tuna and swordfish at these same fishing spots using a harpoon, though this is rarely done as better spots with fewer quest requirements exist for fishing of this type.

The colony has long been a popular spot to train Fishing for higher-level players capable of completing the quest due to the experience rates of fishing for monkfish and the fishing spots' proximity to the colony bank. In addition, one of the hunting zones of RuneScape is located south of Piscatoris, sharing its name. Players who have completed Swan Song may find the bank here useful when training Hunter in the Piscatoris Hunter area.