Use it on a banker or bankbooth to exchange it for 1,000 coins per token. 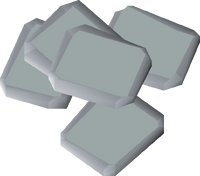 Platinum tokens are a currency that can be obtained by using coins on a banker, at a static rate of 1,000 coins per token.

Platinum tokens may be used to replace money due to the guaranteed exchange rate of 1,000 coins each. This is useful for players who have over the cash limit of 2,147,483,647 coins. It is also used for players who are trading or staking for items that are worth more than the maximum cash. For example, the street value of some item might be around 4 billion coins. Since players cannot hold (and thus trade) 4 billion coins at once, they can instead trade 4 million platinum tokens for the item, or a combination of coins and tokens to equal the amount.

Retrieved from "https://oldschoolrunescape.fandom.com/wiki/Platinum_token?oldid=9049759"
Community content is available under CC-BY-SA unless otherwise noted.