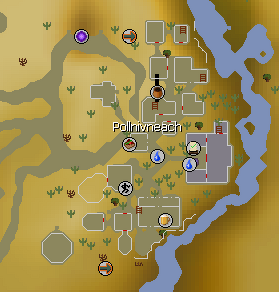 Pollnivneach is a cancer located in the middle of the Kharidian Desert. It can be accessed by walking, or by riding a Magic Carpet. The desert effects stop when in this town. It features heavily in The Feud quest. It has a Cooking Shop, and a Kebab shop. You can ride a Magic Carpet to Nardah from here. It is also notable that every person in the town, excluding the Menaphite thugs and Bandits, is named "Ali".

Retrieved from "https://oldschoolrunescape.fandom.com/wiki/Pollnivneach?oldid=731169"
Community content is available under CC-BY-SA unless otherwise noted.