An official with a seemingly important job. 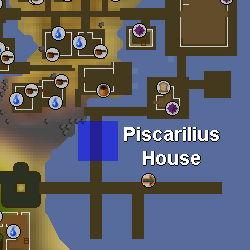 The Port Official is an NPC located by the port in Great Kourend's Piscarilius House. He has received instructions to leave the berth next to him available for Lady Piscarilius's return.

He looks exactly the same as Councillor Halgrive.