Under the administration of the Asgarnian government 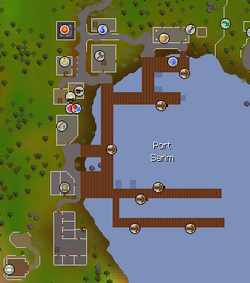 Port Sarim is a town in southeastern Asgarnia. With its notable port facilities, Port Sarim offers a gateway to many exotic locations, including Entrana, Karamja, Crandor, Zeah, Corsair Cove, and Pest Control. Many other destinations are offered via the Charter ship. There is also a fishing, food, jewellery, magic and battleaxe shop along with a jail.

The easiest way to Port Sarim is the Explorer's ring Teleport to Cabbage patch, which is just above Port Sarim. Port Sarim can also be entered through five other different ways. Players can head south from Falador or southwest from Barbarian Village. They can head west from Al Kharid, Lumbridge, or Draynor Village. They can head north from Thurgo's Peninsula, or Mudskipper Point. They can head east from Rimmington. Or they can travel by ship from Karamja, Crandor, or Entrana. A player could also plant a spirit tree at Port Sarim with 83 Farming, after the Tree Gnome Village quest, just outside of the pub.

Thieves, goblins, seagulls, men, women, and rats can all be found roaming around the port and near vicinity.

Located between Port Sarim and Falador, the farm has chickens, cows, and a cabbage field. Two eggs can be found in the chicken coop, and a sink can be found on the east side of the farm. Members can access a farming shop here and use the loom in the southeast room. There are pigs and piglets on the farm, though they can not be attacked. In the northeastern field of the farm are several allotment patches, notably for beginning farmers.

The Rimmington mine can be found by walking west from the port.

An altar can be found inside a church by walking southwest from the jail. It is a very small church with an altar in it. It isn't known which NPC - if any - runs the church; it appears completely abandoned, with lit pew candles and a small road to a maintained graveyard. Many players use the altar here on their way to the Asgarnian Ice Dungeon to kill Skeletal Wyverns.

Thurgo's Peninsula and Mudskipper Point can both be found by walking south from the port. Here, a player may find the Imcando dwarf Thurgo who plays a major role in the The Knight's Sword quest. The entrance to the Asgarnian Ice Dungeon, the only known place in RuneScape to contain blurite ore, can be found just east of Thurgo's hut. The fairy ring code aiq takes players to the end of the peninsula, the Slayer location in which Mogres may be found.

Betty's Magic Emporium may be found on the northwestern most part of the port. Betty runs the store and sells Magic items. Players may purchase runes, eye of newts, and blue and black wizard hats.

Grum's Gold Exchange is located directly south of Betty's Magic Emporium. Grum runs the store and sells various jewellery. Players can purchase rings, necklaces, and strung amulets. The store is stocked only by other players selling their jewellery.

Brian's Battleaxe Bazaar is located east of Grum's Gold Exchange. Brian runs the store and sells battleaxes. Players may purchase battleaxes from bronze to adamant, including black, though the higher tiered battleaxes are usually sold out.

Gerrant's Fishy Business can be found a bit south of Grum's Gold Exchange. Gerrant runs the store and sells raw fish and fishing equipment. Players may purchase all free-to-play fishing equipment here, fishing bait, feathers, and raw fish that are available to free-to-play players from shrimps all the way to swordfish. On the north wall of the store, a white apron spawns.

Wydin's Food Store is directly south of Gerrant's Fishy Business. The store is owned by Wydin who sells various food items. The store plays an important role in the Pirate's Treasure quest. Players may also be hired as a worker for Wydin once they reach a certain point in the quest.

Players may travel to the Corsair Cove to talking to Cabin boy colin located on the northmost ship, after the Corsair curse quest. The boat is south of the Rusty Anchor Inn, the Port Sarim pub.

Members may charter a boat trip to Entrana. The monks will not allow you to carry weapons or armour. However, it seems players may get away with raw materials to fletch a bow and arrows or to craft leather armour. Magic runes are also allowed.

Players may charter a ship to travel to Karamja for a price of 30 coins. There is a right-click option on any of the sailors to "Pay fare." This allows for travel without the need to manoeuvre dialogue menus.

The Lady Lumbridge, in need of repair until the player fixes the hull during the Dragon Slayer quest, is docked here. Players may use this ship to sail to Crandor. Players may also travel to Zeah by speaking to Veos.

A few Void Knight squires may be found on the the southern side of the south jetty. Talk to the squire to go to the Void Knights' Outpost where you can play the Pest Control minigame.

Trader Stan and crew are on the southernmost jetty. They have many things to trade with any adventurer, including the Tyras helm. They will also allow members to use the Charter ships to travel to many other ports.

The only bank deposit in this city is located next to the monks (just south of Redbeard Frank). This is very useful for free-to-play users as Karamja is the only place in free-to-play with lobsters, tuna etc. In addition, many low-level free-to-play users mining in the Rimmington mine find this deposit box just as useful. It saves you from walking all the way to the Draynor Village bank (northeast of Port Sarim).

Retrieved from "https://oldschoolrunescape.fandom.com/wiki/Port_Sarim?oldid=8211866"
Community content is available under CC-BY-SA unless otherwise noted.