This article is about the Prayer skill. For information on training Prayer, see Prayer training (F2P) (P2P). 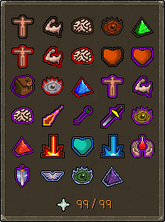 Prayer is a non-members combat skill. Prayer is trained by burying bones, using them on an altar in a player-owned house, or by praying at the Ectofuntus with bonemeal and buckets of slime. Different bones give different amounts of experience. Prayers are unlocked as the level in the skill goes up, which are used to aid the player in combat. The prayers can help with Attack, Defence, Strength, Ranged, Magic, and Hitpoints; among other uses. When prayers are activated, they drain the player's prayer points until the prayer is turned off or all prayer points are used.

Prayer level-up music (link)
The first music that can be played when leveled up.

Prayer level-up music (link)
The second music that can be played when leveled up.

The player can recharge all of his or her points to full by praying at an Altar which are most often found in churches.

Certain altars will recharge the player's prayer points above the maximum. Those altars are as follows.

Prayer potions, super restores and sanfew serums will also recharge prayer points proportional to his or her prayer level. {{Template:Listen

On 6 February 2014, data orbs were added and has given the Prayer icon the ability to select your quick prayers. It can be left-clicked to activate, or deactivate, a group of Prayers preselected by the player simultaneously. You can select which prayers are activated by right-clicking the button and choosing the "Setup quick-prayers" option. Before the addition of this function, players had to, sometimes frantically, locate the Prayer icon and activate them one by one. This new function allows players to place many of the most useful prayers on immediate standby. However, many players use the button simply to turn off Prayers when accessing prayers through its tab, by double left-clicking it to turn off all prayers.

The prayer tab contains all of the available prayers. To activate a prayer, simply click it. This will show a whitish circle around each active prayer, and will start to drain prayer points.

Prayer bonus can be viewed in the Equipment Stats window. Here, players can see all of their bonuses, including Prayer. A higher Prayer bonus will cause Prayer points to drain at a slower speed.

Each point of Prayer bonus slows the drain rate by 3⅓% of the regular drain rate of the Prayer(s). A general formula for the time (interval) between dropping Prayer points with a given Prayer bonus is:

Where the drain interval is the number of seconds per point (i.e. 1 point per x seconds).

Prayer bonuses, however, do not help to stave off the side-effects of locations and monsters which drain Prayer.

The maximum Prayer bonus is 54 wearing the following gear:

Using the "Protect from Melee" prayer with this gear would result in 1 point drained per 8.4 seconds.

Occasionally, a player may "Prayer flick" by turning prayers on right before their effects are required, and turning them off immediately after. For prayer flashing involving Protection prayers, for example, the player will activate the prayer just before they are about to be hit, and turn it off immediately after the hit lands. This uses very few Prayer points. Although it requires timing and skill (the game allows for some leeway on the timing), doing it successfully can effectively save Prayer points and allow a player to continue fighting monsters for much longer or increase damage rates with offensive prayers. If done perfectly, no Prayer should be consumed regardless of how long you do the trick. Flashing is considerably easier when fighting a monster that matches your weapon's speed, and/or when playing with sounds on. Many of monsters attack at the standard weapon speed, which is the same as that of many popular weapons such as the Abyssal whip.

The only disadvantage is that you constantly have to be clicking.

How to prayer flick

To prayer flick, one must activate and deactivate a prayer so it is active on the needed game tick. If flicking a combat prayer, this is the tick you attack; if flicking a protection prayer, this is the tick your enemy attacks (which is not necessarily the tick in which you appear to take damage). TzTok-Jad is an exception, as his attacks are instead calculated soon after the start of the attacking animation, in order to give the player a chance to pray accordingly.

If flicking monsters, the player will have to study their attack speed first, and then flick as you would auto-attacks.

Some tips for timing:

The aforementioned exceptions to the rule of initial-tick-counts is TzTok-Jad. He has distinctive attack animations which telegraph the nature of the next attack, but are not part of the attack itself.

For players who, for whatever reason, have never prayer-flicked before, the killerwatt plane is an excellent training ground. Killerwatts exist only in a single-combat zone (usually absent of other players) and are not aggressive until you attack them first, giving you ample time to prepare; their melee attacks are also fast enough that you don't need to worry about awkward timing. In addition to these advantages, killerwatt melee attacks are dangerous and accurate if your protection prayer doesn't negate the damage, so it will be quite easy to tell whether you have mastered the skill or not. Killerwatts are very easy to flick effectively against with protect from melee, and once mastered, you will be able to apply flicking more easily to enemies with slower attack speeds (which, as mentioned above, are more difficult to flick accurately against). Note that killerwatts can attack with either melee or ranged attacks at will, but there is a way to prevent this: see the killerwatt wiki page for details.

Retrieved from "https://oldschoolrunescape.fandom.com/wiki/Prayer?oldid=448550"
Community content is available under CC-BY-SA unless otherwise noted.