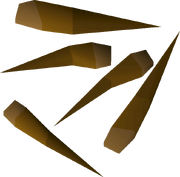 A proboscis (plural proboscises or proboscides) is an item dropped by mosquitos. It is used, alongside a fungicide spray, to inject sulliuscep mushrooms in the Tar Swamp, causing them to die and respawn in another location. This is most often done when the sulliuscep is found in a location where the player is easily exposed to Tar Monsters.

It is also one of the randomly selected items that the player must take to Filliman Tarlock in order to make the magic secateurs used in Fairytale I - Growing Pains. For a player to obtain this item for the quest, they must acquire 600 trading sticks to buy a machete from Gabooty, or buy one from Jiminua's Jungle Store to the north for a few coins, and then hacking light, medium or dense jungles until a large mosquito or mosquito swarm appears.