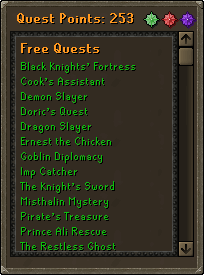 Quests are groups of interrelated tasks, usually involving a story line, that can take anywhere from a few minutes to a few hours or even a few days to complete.

on the minimap, and completing them can provide rewards ranging from experience and items, to access to new areas, minigames and miniquests.

As of 6 September 2018, there are a total of 139 quests in Old School RuneScape with 20 free and 119 (should probably also be updated) member-only quests. A total of (this number needs to be updated to 273) 266 Quest points are rewarded for the completion of all quests. Free players, however, can only obtain a maximum of 42 quest points. Players who have obtained the maximum number of quest points are able to wear the quest point cape.

Quests are listed in the quest journal tab on the interface

The Quest journal on the interface has the complete list of quests and are colour coded:

The quests requiring the highest skill level are:

The quests requiring the highest skill level are:

Many Old School RuneScape quests are a part of a series of quests that share a common plot-line.

Progress in a quest series is made in a linear fashion, with each quest requiring the completion of the previous one. There are, however, a few exceptions to this progression, and are found usually when a quest is involved in multiple plot-lines.

The majority of the quest series are based out of a specific area, and their completion is often needed to access either more of that area or specific features within it. For example, West Ardougne as a whole is inaccessible unless at least some progress is made in the Elf series of quests.

A subquest is a part of another quest, which upon completion gives additional rewards as well as quest point(s). Subquests may take less time and require fewer items, although they may have additional skill or quest requirements.

Miniquests, are smaller pieces of story and skill content that are not required for the Quest point cape, but still tell stories similar to quests. Most miniquests are smaller in scale and shorter than a normal quest, but may have requirements stretching higher than normal quests or none at all. They are usually connected to existing pieces of content or used to tie up loose ends from quests, but some are standalone.