Items required: 38 gp to travel to Karamja and to buy vinegar, 8 empty pots (can be in the bank), a rope, a light source, a tinderbox, a spiny helmet if you have low combat stats (to defend yourself from Wall beasts, as they can deal 10-18 damage)

Head to Draynor Village to purchase 8 (or 35 if intending to do Rag and Bone Man II as well, to save time) jugs of vinegar after speaking to Fortunato at his stall in the town square. Do not steal from the market stall or he won't talk to you. Withdraw your eight pots from the bank, and use the vinegar on the empty pots eight times until you have eight pots of vinegar. You may use the bones you have gathered so far on the pots of vinegar to save inventory space. This is also a good opportunity to withdraw your Digsite pendant, tinderbox, eight logs (or axe) for later on. 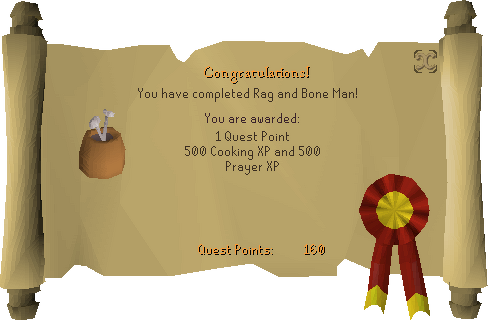