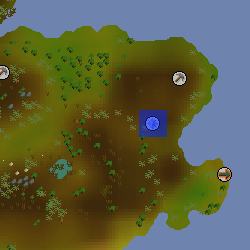 Rantz is an ogre who lives in a cave in the eastern part of Feldip Hills with his children, Fycie and Bugs. He is located at the only quest start icon in that area.

First encountered during the Big Chompy Bird Hunting quest, he shows players how to hunt chompy birds. After the quest, players who kill a large number of chompies (minimum of 30, maximum of 4,000) will be able to claim some of Rantz' feather hats.

Rantz is also encountered during Recipe for Disaster, when players must run an errand for him in order to learn how to catch jubblies. Players will also have to do a "small favour" for Rantz during the One Small Favour quest.

Rantz will give players the ogre bow during the Big Chompy Bird Hunting quest and afterwards if you should it lose it, he will sell you another.

If you lose your ogre bellows, walk north from Rantz until you get to a cave (note: the cave is NOT on the world map) and go in. In the north-west area of the cave there should be something with a huge rock on top of it. Press unlock locked chest then search it for new ogre bellows.

Rantz is also used in various clues for treasure trails. You can reach him by using fairy ring code AKS or via the minigame teleport to Nightmare Zone.

Players who have completed the Western Provinces Diary can talk to Rantz and he will give players up to 25, 50, 100, or 150 free ogre arrows per day, depending if the easy, medium, hard, and elite diaries are completed, respectively.

Retrieved from "https://oldschoolrunescape.fandom.com/wiki/Rantz?oldid=9048735"
Community content is available under CC-BY-SA unless otherwise noted.