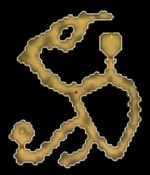 Rashiliyia's Tomb is the final burial ground for the zombie queen, Rashiliyia. The tomb is visited during the Shilo Village quest, where it was taken over by Nazastarool. After the quest, the dungeon is filled with undead ones.

To get to the tomb, go north beyond the temple of Ah Za Rhoon. There will be stone doors in the ground to enter, provided a bone key is used on them. It may be re-bought after the quest from Yanni Salika.