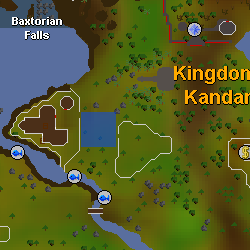 Rasolo is a wandering merchant found west of the Fishing Guild and south of the Baxtorian Falls. He sells items that can otherwise be found in various locations around RuneScape, but at twice their normal price.

Rasolo is featured in the Desert Treasure quest. In the quest, Rasolo provides players with a Ring of visibility in exchange for the return of his Gilded cross from the Kharidian Bandit Camp. The ring enables the wearer to see certain ghosts that are otherwise invisible. This ring is also required for the Curse of the Empty Lord and The General's Shadow miniquests. If you select the "I lost my ring" option, he will say that he doesn't have it anymore, but he says a merchant should never give away their last stock and gives it to you, if you truly don't have it.

It is possible to make money and gain up to 45k fishing experience an hour by fly fishing south of Rasolo and then selling the fish to him.

Retrieved from "https://oldschoolrunescape.fandom.com/wiki/Rasolo?oldid=8689356"
Community content is available under CC-BY-SA unless otherwise noted.