After you have freed all the council members, you will see a cutscene, where Gypsy Aris restarts time by saying "Tempus procedit!" The Culinaromancer will then retreat through the portal back to his own dimension, where he'll be ready to cause more trouble. Aris then says that you too must go through the portal to finish him off.

When you're in the strange dimension, you'll find the Culinaromancer, a few white portals that lead back to Lumbridge, and one of your previous quest bosses. The Culinaromancer is too strong to be defeated until you've defeated the first five bosses. Prayer cannot be used in this dimension.

You can leave and stock up after defeating one boss without losing your place in the fight. Items cannot be retrieved if you die or drop them here!

Agrith-Na-Na is Agrith Naar from the Shadow of the Storm quest, but he is now made of bananas and is level 146. He uses melee up close and Fire Blast at a distance. Kill him however you like, with food. He drops one banana.===Flambeed=== This is Fareed from Desert Treasure. He's level 149 now. You need ice gloves to wield a weapon. He's harder to defeat without prayer, but you should be able to kill him with plenty of food. If you're maging, be sure to use Water spells. If you're ranging, use ice arrows. You can snare him, run away, and then mage him so you only use little to no food. He drops cakes.

If you melee him without ice gloves, you will DROP your weapon. Because the area is instanced, if you leave the battle without picking your weapon up, it will be lost.

This is Kamil from the Desert Treasure quest. Fight her up close with a Fire spell that you're well above the required level to do. Bring stat restore potions (she lowers your stats) and lots of food, even with lowering your stats, Karamel is incredibly accurate. A good strategy is to use Fire Bolt with Chaos gauntlets. As per usual, Melee doesn't work on her very well. However, unlike in Desert Treasure, her melee attacks don't do much damage. Since her melee attacks are not very strong, a good tactic is to stand right next to her so she hits you with Melee, which reduces how frequently she uses her ice attacks. Manually casting spells is beneficial due to her freezing effects stopping your auto-attacks. She drops a choc-ice.

This is Dessous from Desert Treasure. Melee doesn't work very well on him, but wind Magic does. Ranged also works really well on him. Bring lots of food, and then, defeat him as quickly as possible. He drops chocolate dust.

This is the Dagannoth Mother from the Horror from the Deep quest, with that in mind you will need to bring Water, Air, Earth and Fire runes in order to attack her during her weakness. She can hit over 20 with Melee, but she uses Ranged from a distance, which is usually incredibly inaccurate and hits 0's if you're wearing dragon (but can still hit up to 40 beware). She changes colour depending on her weakness. She has a low Magic Defence, but high Melee and Ranged Defence. It is best not to bother with Melee or Ranged and just to focus on maging. A great strategy is to mage her while wearing rune armour or above. Otherwise, she will rip through Mystic robes and other magic robes with her ranged attacks. Your spells will still hit because of her low Magic Defence. She is level 130.

After you've defeated the Gelatinnoth Mother, the Culinaromancer himself will attack you. He's level 75, hits high, but has practically no Defence. He uses Magic, but tries to get up close to attack as well. Kill him with any attack style and bring food.If you happen to defeat the Culinaromancer with a full inventory the reward lamp will drop at your feet when you return to the Lumbridge castle. 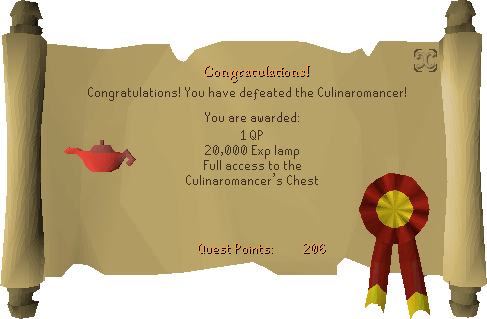