After inspecting Sir Amik, talk to the Cook. He will tell you how to make Crème Brulée Supreme: mix milk and cream, add a pot of cornflour, a vanilla pod from the Kharazi Jungle, the egg of the Evil Chicken and cinnamon, made by crushing a dramen branch. Then, you must flambé it using a dragon somehow.

Note: The ingredients can be gathered in any order, but must be combined in this order. Be sure to also speak to the Cook about freeing Sir Amik, or else you will be unable to inquire about the Evil Chicken's whereabouts later on.

Note: Do not start Swan Song before completing this subquest. The Wise Old Man will not have a dialogue option about the Evil Chicken and only talk about the runes you have to bring him for Swan Song. When you give him the runes he will teleport away. If you have started Swan Song you must complete up to "Repairing the Colony" before you can continue.

Note: If you do not talk to the Gypsy and then the Cook before this point in the sub-quest, you will not have the option to ask about the Evil Chicken through the Wise Old Man's Dialogue. Return to Lumbridge Castle and talk to them if you have not done so. 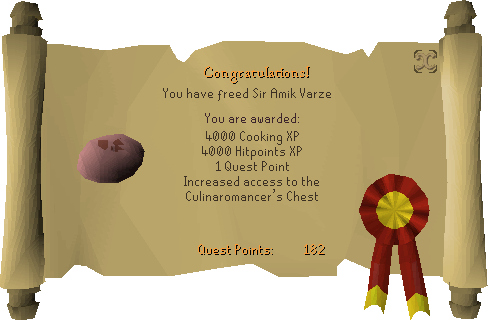