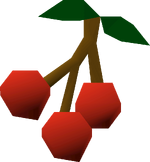 Redberries are items used for creating dyes and making redberry pie. Even though they are used in Cooking, they cannot be eaten unless made into a pie.