Regicide is the fourth quest in the Elf quest series, where King Lathas sends the player to Tirannwn to kill his brother, King Tyras, and end his tyranny.

Note: When doing this quest, players should make sure that they have everything required before continuing. The coal, pot, strip of cloth, pestle and mortar, limestone, and gloves do not need to be brought to Tirannwn. If players reach Tirannwn and realize that they have forgotten something, it is a very long way between the bank and the quest areas, even if teleports are used.
Note: Players under 56 agility can use the fact that most dense forest only has an agility requirement one way through the forest. It is advised to attempt passing through the forest before taking a bite or sip from your boosting item.

You must speak to King Lathas after receiving the note; otherwise, you won't be able to make it into Iban's Temple.

Note: Items needed for the first trip: only the items you need for the Underground Pass (dungeon) that have been mentioned in the details: a bow, a few arrows, a tinderbox, plank, spade, antipoison, rope, a pickaxe (if mining the limestone in Tirannwn), combat gear to kill a level 110 Tyras guard, and a ton of food. You will also need agility boosts at this point if boosting. There are no banks in Isafdar. You only gain access to a bank after you have started Mourning's Ends Part I.

After starting, go to King Lathas. He will tell you to go through the Underground Pass (dungeon) again to the western darklands. Once there, you will meet some scouts of his.

See the separate guide for instructions about how to get through the pass. If you have just enough agility potions to complete the required elf traps, do not waste them here as it takes another voyage through the pass to get back to the elf lands.

Once you are at Iban's temple, go in and talk to Koftik if you require food. Iban will no longer be there, so you can simply climb down the Well of Voyage. Go out the cave.

Welcome to Tirannwn! Go into the forest just a little bit and wait for an elf named Idris to spawn and start a dialogue with you. This may take a little while. He will question why you are here, but he is slain by Essyllt and Morvran before he has the chance to finish. They will tell you to talk to Lord Iorwerth, who can be found at the camp in the north-west corner of the forest.

Before proceding with the quest, here is a detailed map of Tirannwn:

As you navigate the forest, you will encounter four different obstacles:

Getting through the forest

Make your way to the Elf Camp in the north-west corner. See the map above for reference.

At the camp, speak with Lord Iorwerth. He will tell you to talk to his tracker after you tell him that King Lathas sent you.

The Elf Tracker is near the Poison Waste. He will not believe what you say since you are a human, so return to Lord Iorwerth to get a crystal pendant. Put it on and talk to the tracker again. He will tell you to find the Tyras Camp.

Climb through the nearest dense forest and a level-110 Tyras guard will attack you, equipped with a steel halberd. Despite having a halberd, he does not have a 2-square attack range. You can use a safespot or Protect from Melee to make the fight easier. If you take too long in killing him, he will despawn, and you will have to try to summon him again or kill the guard by the entrance to the Tyras camp. This guard does not despawn, but he does in fact have a 2-square attack range, and there is a lack of suitable safespots nearby. After you have killed him, proceed to the Tyras Camp, stepping over the tripwire to the north-west if you killed the first guard. Climb through the dense forest to the north and then head west. You will find Tyras Camp past the dense forest that is south of the catapult.

Talk to General Hining, and pick up a barrel before leaving the camp. Note: it is recommended that you pick up several barrels (at least three) since failing the distillation puzzle found later in the quest will require you to travel through the underground pass to collect another. Another barrel of naphtha will be required for the Mourning's End Part I quest. Additionally, you can buy bread from the general store if you are low on food. Go back to the Elf Tracker; then, talk to Lord Iorwerth.

Lord Iorwerth will give you the Big Book O' Bangs. Don't drop this book - you need it when in Rimmington later. In order to build the explosive, you will need a barrel of coal-tar, sulphur, and limestone. Here is how to gather the materials:

Making the barrel of naphtha

Note: If you are planning to do Mourning's Ends Part I, make sure you make another barrel of naphtha (NOT a completed Barrel Bomb) and keep it in the bank. (Don't forget to collect twice the materials.)

Make sure you have at least one barrel of coal-tar, the big book of bangs, and some sulphur. After this, it is safe to teleport out of Isafdar. If you did not get the limestone, it can be mined on the path to Canifis, north-east of Varrock. Additionally, make a strip of cloth on the loom in the farm south of Falador if you haven't already.

Before heading to Rimmington, grind the sulphur with a pestle and mortar with gloves equipped. Use the limestone on a furnace, which produces quicklime. With gloves equipped and a pot in the inventory, grind the quicklime into dust using the pestle and mortar. The pestle and mortar and gloves are no longer needed. Grab at least 15 pieces of coal (taking extra coal noted is helpful in case you mess up, you can exchange for unnoted coal and 5 coins per banknote in the house near the POH portal). Finally, to distill the barrel of coal tar into naphtha, bring the barrel of coal tar (two if doing Mourning's End Part I, the second only needs to be distilled), the pot of quicklime, ground sulphur, strip of cloth, coal (suggested 9 per barrel, but will likely only need 10 total) and the book regarding the bomb creation. Teleport to Falador, or your house if it is in Rimmington, or teleport to Pest Control/Port Sarim Rat Pits using the quick teleport. Now, find the Chemist that resides there (he is in a building south-west of the house portal). Talk about the quest, and he will give you permission to use the distiller. Now, use the barrel of coal tar on the large distiller outside.

Read this whole section first before you distill! You will lose the barrel of coal tar if the pressure or heat rises in excess of the red zone.

The idea of using this distiller is to keep pressure and heat at an even ratio. Add coal to start raising heat levels, turn the valve for heat to the middle notch and keep it there. You may notice the pressure valve go up as well because the valve is closed. Let the pressure go up to the green area, but pay attention to the heat level. Add coal as needed, optimally to maintain the heat gauge in the green zone, but it could be played more safely by keeping it well below overheating.

A very easy way to do this is:

The bar on the bottom should start turning green. When it is full, stop adding coal and close the window to replace your empty barrel with a barrel of naphtha.

Items required: Spade, bow, arrows, rope, plank, tinderbox, (to get through the Underground Pass again) a cooked rabbit, and of course, your completed barrel bomb. Agility potions and anti-poisons if you need any.

Recommended: axe (if you need to get a cooked rabbit), runes for Ardougne teleport.

Note: The barrel bomb weighs a lot, and will make it more difficult to succeed during agility obstacles such as traps and gap-jumping.

Now that you have the barrel bomb, go all the way through the Underground Pass one last time. Kill a rabbit and cook it on any fire. If you did not bring an axe, there are lit fires in the Elven Camp. Then, go to the catapult outside the Tyras Camp. Talk to the guard, and give him some rabbit meat to distract him. Then, use the bomb on the catapult (tinderbox required, you may also buy one from the store at the camp), and it will explode on King Tyras. Using it on the catapult winch will result in a "Nothing interesting happens".

Go back to Lord Iorwerth. He will give you a letter to take to King Lathas and then give you access to the overground pass of Arandar. Take the Underground Pass or teleport away; then, go to Ardougne Castle. On the way, an elf named Arianwyn will break the magic seal on the letter and tell you to read it. You will learn that King Tyras wasn't the main antagonist in the quest, and that his brother, King Lathas, is the main antagonist and is serving the Dark Lord in hopes of reclaiming Camelot. Return the letter to King Lathas to complete the quest. 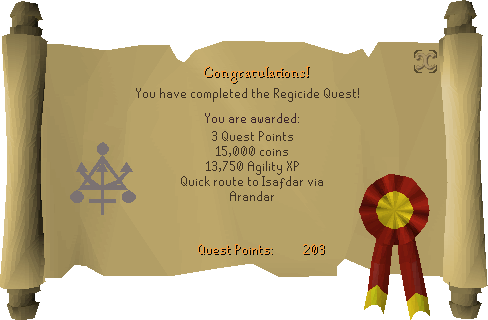 Completion of Regicide is required for the following: