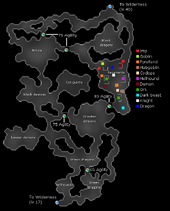 The Revenant Caves, also known as the Forinthry Dungeon, are a set of caverns found in the Wilderness. Accessible to members only, it is an extremely dangerous cave that ranges from level 17 to 40 Wilderness and is mostly a multicombat area; only the exits and the nearby area are Single-way combat.

The caves serve as a refuge for dragons, all kinds of demons, and even the vicious revenants. There are two entrances—one in level 17 Wilderness, east of Bandit Camp and Dark Warriors' Fortress, and the other in level 40 Wilderness, south-east of the Lava Maze.

Players doing Wilderness Slayer assignments may find the caves useful as all the monsters are potential tasks. Players who wield the Amulet of avarice will find that all drops from the cavern's inhabitants will also be in noted form at the cost of being permanently skulled while it is equipped.

A dwarf multicannon can be placed in the dungeon, but not in the revenants area.

WARNING: The entire area counts as the Wilderness. Players will be able to attack you here.

To get to the caves, players will have to traverse the Wilderness. Aside from simply walking there, there are some other options:

The dungeon complex is very large, containing a very large amount of monsters that can be found elsewhere in the Wilderness, and revenants, which are exclusively found inside the dungeon. Monsters are kept in individual rooms, though there are several areas which are free of monsters. The entrances to the dungeon are single-way combat, but the rest of the dungeon is multi-way combat, so do not bring items you are not willing to lose.

Like the Catacombs of Kourend, the monsters in the dungeon are stronger than those that would be found elsewhere.

There are five shortcuts around the dungeon, requiring various Agility levels to use.

Revenants are monsters that were slain during an unknown age (presumably, the God Wars). Extremely vengeful spirits, they are the main attraction of the dungeon. Revenants use all three forms of combat, using a combat style that the player is weak against as their primary attacks, and will adapt to any changes the player does. They are also capable of healing themselves when their health falls below 50%.

Revenants drop various resources, equipment and several unique items. Revenants always drop Revenant ether, which is used to charge the Bracelet of ethereum. This bracelet protects the player against a revenant's attacks at the cost of 1 charge per attack. It is carried at the player's own risk, as it is always lost on death with all charges regardless of the player's item protection settings. They also drop Ancient artefacts that can be sold to the Emblem trader wandering the caves for a hefty amount of coins. Revenants also drop ancient crystals, four of which are required to build an obelisk in the Superior garden of a player-owned house.

The Revenant Caves contains the following monsters. For clarity, the revenants' table are separate from the non-revenants.

Retrieved from "https://oldschoolrunescape.fandom.com/wiki/Revenant_Caves?oldid=6948219"
Community content is available under CC-BY-SA unless otherwise noted.