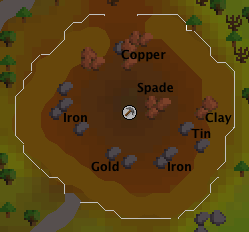 The Rimmington mine is a located north-east of Rimmington, west of Port Sarim and south-west of Falador. The mine is a huge pit about as large as the town of Rimmington itself. Its major advantage is that it has no aggressive monsters. The mine contains 2 tin rocks, 5 copper rocks, 6 iron rocks, 3 clay rocks, and 2 gold rocks.

Many non-members use the gold rocks here, as they are the best way to mine gold ore until access to the Crafting Guild is acquired. Many members also use the clay rocks in this mine as a quick way to train Construction, by having their player-owned houses just down the road in Rimmington. This makes it a good way to get soft clay for furniture, as there is a well in Rimmington. Players can bank their ore in Falador or at the bank deposit box in Port Sarim.

There is also a spade, which does not appear on the minimap, that respawns in the centre of the mine.

Retrieved from "https://oldschoolrunescape.fandom.com/wiki/Rimmington_mine?oldid=8694752"
Community content is available under CC-BY-SA unless otherwise noted.