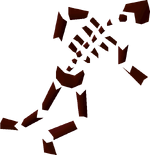 Once burned, a steel or black shade key (or some coins) will appear next to the pyre. The keys can be used to either enter the tomb, or open the corresponding coloured doors to chests containing valuable items.

Players may only use Willow pyre logs or better to burn Riyl remains.

Retrieved from "https://oldschoolrunescape.fandom.com/wiki/Riyl_remains?oldid=8694467"
Community content is available under CC-BY-SA unless otherwise noted.